Poker is the most popular card game in the world. When it comes to Poker, the traditional Texas Hold’em is frequently meant. There are also other variations (Draw, Stud, Omaha, and Lowball) but their popularity does not beat the one of the classical Hold’em. As for bet limits, no-limit, limit, and pot-limit Hold’em is distinguished.

Game philosophy puts a gambling component on the back burner. Poker is a game of logic, tactics and strategy. In order to win, it is required to think, know the rules perfectly and build up experience. Texas Hold’em is a game where an unprepared newbie have slim chances of beating an active expert, not to mention professional gamblers.

A popularity of Poker is conditioned by rich cultural heritage it is connected with. The given game remains highly relevant for more than 450 years. Besides, Hold’em was a national symbol of the USA for a long time. The sport discipline status assignment made its contribution to popularization as well, which resulted in intense media coverage, commercial activity activation, advertisement and contracts with sportsmen. There exist about 20 films about Hold’em. The most popular are «Lock, Stock and Two Smoking Barrels», «Lucky You», «Maverick», «Casino Royale» etc. In addition, Texas Hold’em owns its promotion to the Pokerstars online service.

Learn how to play Poker

4 mistakes of beginner players to know and avoid 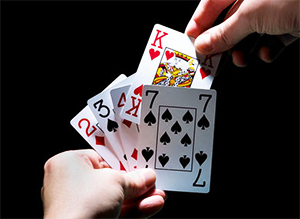 This famous card game is known not only for Texas Hold’em. There are about 20 well-known variations of rules which may be modified depending on the region, culture and even specific communities. Double Discarding, Omaha, Draw and Stud Poker are the most popular types.

Stud Poker. It was highly popular before Texas Hold’em acquired currency. There are variations where 4, 5 and 7 cards are dealt. The difference is that you should firstly place your bets and further one face-up and two face-down cards are dealt (for a seven-card deal);

Draw Poker. This variation of game is popular due to its simplicity – it can be played both in small groups of friends and within the family circle. Frequently, it is uncommon to play for money. The session scheme looks like this: a five-card deal, a round of betting, card changing if desired and the last round.

Double Discarding. The rules are analogous to Draw Poker. The only difference is that the players change their cards twice. Moreover, up to 7 gamblers are allowed simultaneously taking part in the gaming session.

Omaha. As distinguished from Hold’em, it is a nine-card game and 4 face-up cards are dealt instead of 3. However, as a result, five-card combinations are used. Omaha is often called Omaha Hold’em because their rules have lots in common. 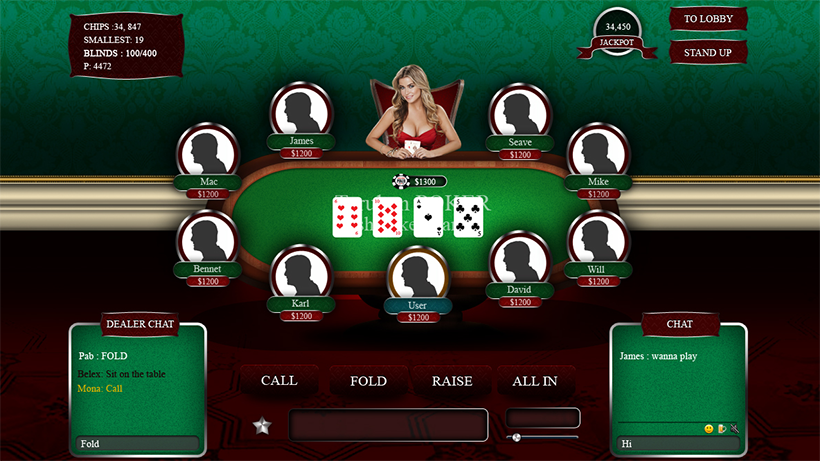 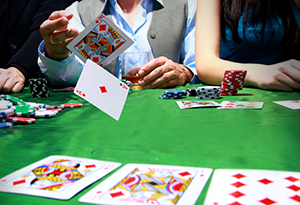 The main objective of this game is to win money by capturing the pot and getting the best combination consisting of 5 community and 2 pocket cards. A deck has 54, 36 or 32 cards. There is a standard order of suit ranking but an Ace may have rank low when it comes to Straight. According to the rules, 2-10 players can simultaneously sit at the table.

The action proceeds clockwise. The first round of betting is started by a dealer. In online Hold’em, a random player or a computer acts as a banker. In offline ones, this role is assigned to the dealer. A dealer button indicates the blind bet designation. It goes left after each deal. The process looks like this:

Two players sitting on the left hand side of the dealer should place their bets. The first member of a round places a small blind on the table and the next one should place a big blind which is twice as large as the first bet. 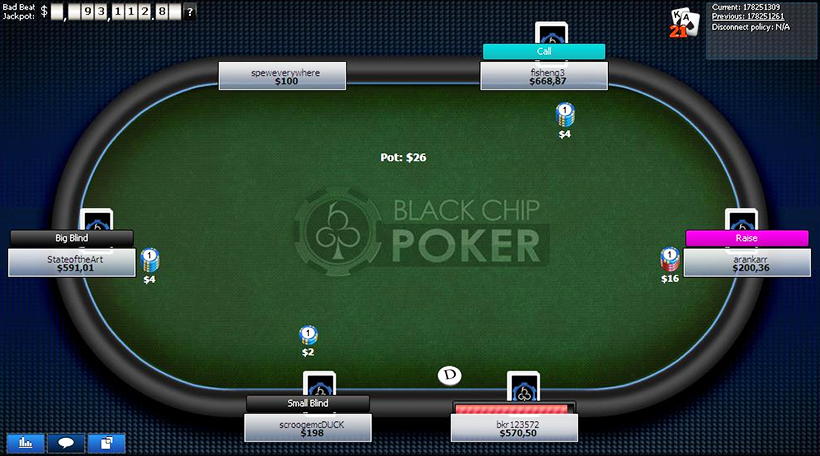 The first distribution of cards in the round, the pre-flop stage

Then the banker deals two pocket cards to each player. The first betting round is called the Pre-flop. The players make their own decisions whether to place bets and continue playing or fold. If he chooses the first variant, it is required to place a bet which should correspond to a big blind or be at least twice the size of it. It is impossible to split big blind chips. Besides, the gamblers may play all-in and stake all their chips. Betting is continuing till all members call their bets.

The croupier puts three face-up cards on the table. These actions are called the Flop. The players may use it as the basis for their future combinations. Further, it is time to start the second round. It is called the Post-flop. After doing this, the floor is given to the player sitting on the left hand side of the dealer. Just like other gamblers, he has the following variants: 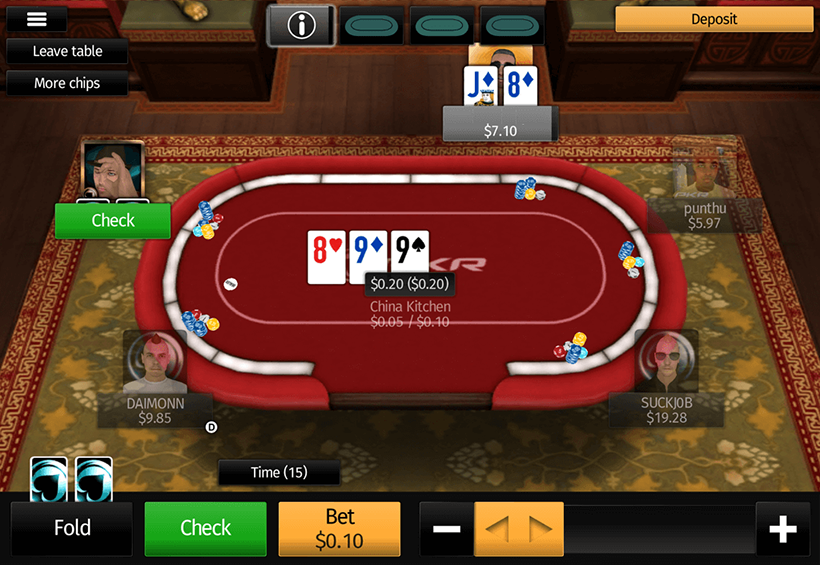 Selecting an action in the current move

After the first bet is placed at the Post-flop stage, there are three case scenarios:

If no one put their chips on the table, the Post-flop comes to an end without the preliminary bet. The croupier deals the fourth card which is called the Turn. The Post-turn stage begins. Its rules are analogous to the Post-flop. Then the last card called the River is dealt. Betting rules are identical to two previous stages.

At the final stage, a showdown takes place. It starts after the River betting round is finished. The player who raised his bet last is the first who shows down the cards. Otherwise, this responsibility is shifted on the player who called a bet last. The best combination wins.

High card has no pair. It is the last in Poker hand ranking;

One pair is two cards of the same rank (for example, two Queens);

Two pair is a combination of two cards of the same rank and two cards of another rank (for example, two Jacks and two Kings);

Set is a hand containing three cards of the same rank;

Flush is five cards of the same suit of any rank;

Quads or Four of a kind is four cards of any suit but of the same rank;

Learn how to play Poker 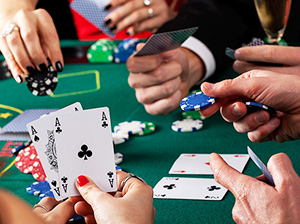 Remember that the winner is not that player who owns good hand but that one who knows how to use any cards he has. This expression is well-known in the poker community. The whole process reduces to a number of mathematical, logical and psychological triggers: 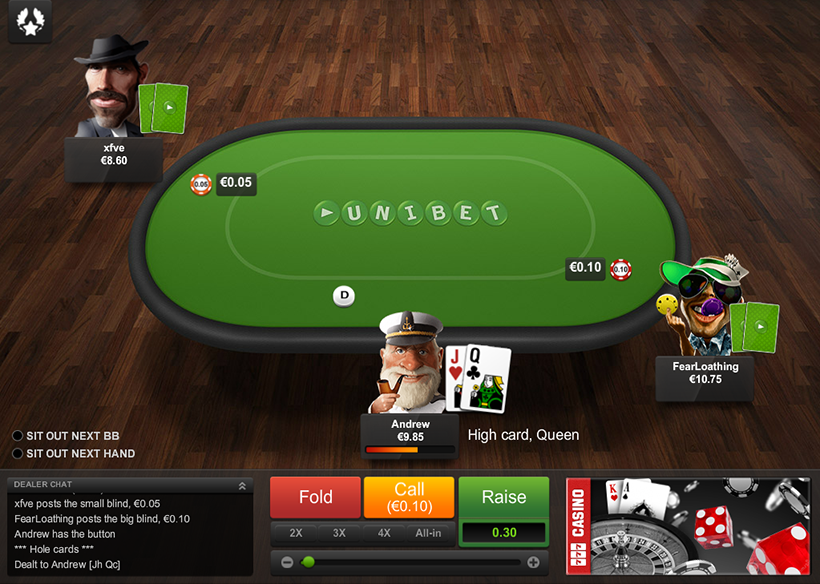 There are also dozens of other tricks – it is possible to understand their essence and definition as time goes by, when you start digging in forums, blogs, and interviews with Poker experts, getting your own experience. Poker will be a perfect choice for those people who are able to think, wait, hide their emotions and read the ones of other players. It is better to start with $0,5-$1 and your buy-in is recommended to be equal to $50-100. This category includes 80-85% of gamblers – there are lots of winning chances but staying too long in low buy-ins is not advisable.

View this short video to understand how to play Texas hold’em:

4 mistakes of beginner players to know and avoid 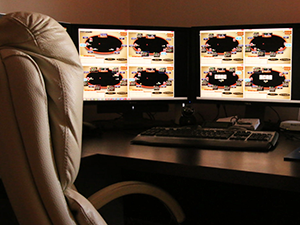 Remember that the Fibonacci systems and others which are used in gambling cannot be used in Hold’em or other rule variations. A positive rate (the win/loss ratio) can be reached by means of raising your own level only. In order to achieve it, it is required to analyze sessions, record your growth and read much topical literature.